Posted on January 4, 2013 by TruthWorks Network 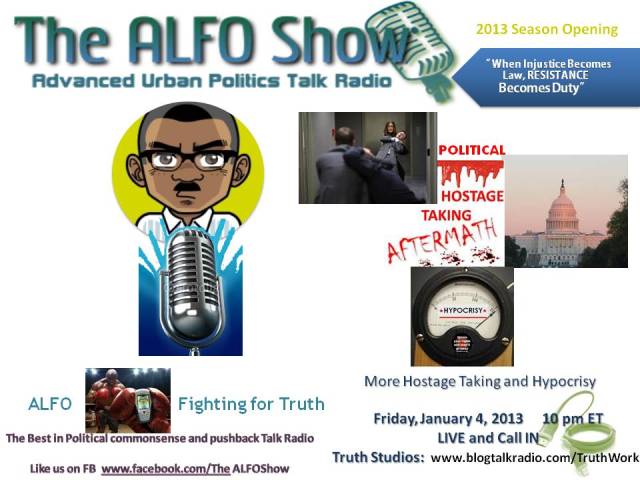 The ALFO Show is a weekly, live and call-in broadcast which reviews, analyzes and discusses the major political events and consequences in America.  From government policy to congressional and executive decisions.  From public policy to public outrage . . . it ADVANCED URBAN PROGRESSIVE POLITICAL TALK RADIO.

THE ALFO SHOW provides Political Insight, Analysis and Review . . . calling out the madness on the full spectrum of the political landscape. He calls out the  issues, lies, intentional and conspiratorial confusion and the names of those who perpetuate the grooming of a misled and misinformed and underinformed Black electorate and activist community. ALFO challenges the weak, knee bending, shadow fearing leadership and politics in America. Every Saturday he is challenging Black people to pick up the mantle.  He provides a scathing critique of racist politicians, corporate controlled and paid for public policy maker and those who support them.

He points out lessons on and about today’s News, Political Events and Newsmaker Personalities.

The ALFO Show is an alternative for Black people who are harmed by“ the scathing critique of racist, corporate controlled media has largely and not surprisingly been ignored by those whom the author, Ismael Reed labels the “Jim Crow Media.”  The ALFO Show is the Best of PUSH-BACK POLITICAL TALK. Listeners call it, “just damn’ talk radio”.

The ALFO Show broadcast on Fridays, 10 pm ET from the TruthWorks Network Studios. All programs are archived for post-broadcast listening.

TruthWorks Network The Black Voice Collaborative Live and Call-In Talk Radio Talk radio engaging in discussions and providing informed knowledge of contemporary world political events and issues. Presentation of ideas, research and scholarship as a basis of analysis. Informed dialogue, hosted by knowledgeable and experienced voices. This is serious talk radio, focusing on TALK THAT MATTERS. The Black Voice Collaborative on Blog Talk Radio. Presenting some of the best more concise voices which examine, analyze and explore issues about and for the Black community. From insightful and in-depth with scholars and activist to authentic discussion about Black families, relationships and children, to “just damn push-back political smackdown” . . . Discover YourSelf on Truthworks Network. Truth Works Network A broadcast product of OUR COMMON GROUND COMMUNICATIONS LLC
View all posts by TruthWorks Network →
This entry was posted in About TruthWorks Network, The ALFO Show Blog. Bookmark the permalink.